The main difference between Shell Rotella T6 5W40 and 15W4 is viscosity which allows you to choose one for your diesel engine vehicles. Diesel engines are a unique breed in terms of compression ratios, torque, and output. This new low-emission diesel can run at exceptionally high temperatures, shearing oil at a much faster pace and producing more soot than older diesel.

Use synthetic oil on your automobile as it improves performance, reduces wear and tear, and extends engine life. These lubricants are more efficient than ordinary motor oil because they go through an engine’s components with less friction.

In terms of quality and performance, Rotella oils have a long track record of reliability. More and more people are turning to Shell Rotella T6 5W-40 and Shell Rotella T6 15W-40 as alternatives throughout time. Shell Rotella T6 5W40 vs 5W40 T6 synthetic oils will be reviewed in detail in this article. In particular, we’ll talk about:

In this post, before considering the goods and bad of Shell Rotella T6 5W40 vs 15W40, let’s explore the manufacturer’s claims about the product.

According to the makers of Shell Rotella T6, if you’re looking for the best oil for your diesel car, go no further than the Shell Rotella series of heavy-duty oils. Shell Rotella T6 Full Synthetic heavy-duty engine oil has “Triple Protection Plus” technology to combat wear, deposits, and oil breakdown, which incorporates completely synthetic base oil and modern additive technology.

You can rely on Shell Rotella T6 Full Synthetic Diesel Engine Oils for fuel-efficiency performance, compliance with exhaust emissions control systems, and protection at harsh operating temperatures. Manufacturers claim that Shell Rotella is a high-performance engine and radiator coolants and lubricants. Heavy-duty diesel engines benefit significantly from their defense. After comparing Rotella T6 5W40 vs 15W-40 it is clear that these synthetic oils provide a wide range of specialist Rotella oils that are proven to protect your vehicle in all weather conditions.

Shell claims that Rotella T6 5W40 temperature range is up to 200oF and it offers superior protection against hazardous wear and corrosion over API CJ-4 oils of prior generations (93oC).

You may choose from three different kinds of engine oils depending on your vehicle. Synthetic and synthetic blends are better suited to current engines than conventional oils, which are best suited for older and simpler engine models. Even if you’re a vehicle aficionado or at least know a little about motor oils, it might be tough to narrow your search to just one.

Unlike traditional and semi-synthetic Rotella 5W-40, Shell Rotella T6 15W-40 Full Synthetic Heavy-Duty Diesel Engine Oil has been engineered and produced to deliver superior performance. This is excellent motor oil with a 5-star rating, and it is made to operate well in humid and hot surroundings, and that’s precisely what it’s intended to do.

It is designed for new low-emission heavy-duty engines and older hard-working diesel engines. It is a fantastic option for the general haul, on-highway fleets, construction, agricultural, and diesel pick-up trucks because of its wide variety of requirements and certifications from several of the world’s major engine manufacturers.

You may increase the performance of your engines, including horsepower and fuel economy, by using this oil. The ability to utilize all and any Shell Rotella T6 specs will make it easier for you to repair your automobile.

15w40 full synthetic diesel oil is engineered for maximum performance, and it safeguards your engine and aids in fuel efficiency improvement. It also complies with API SN and ACEA A3/B4 standards in Europe and the United States. This product offers wear protection, boosts fuel economy, minimizes friction, and raises performance by lowering pollutants. Its prominent features include:

A heavy-duty Shell Rotella T6, when compared to other motor oils, steel engine oils are better at protecting against wear, sludge, and corrosion and being more stable at high temperatures. Thanks to their outstanding protection, oil-cooled engines give the most exceptional performance without losing efficiency at all speeds.

Both mechanical and corrosive wear may occur in an engine, and these two forms of wear are often seen together in automobiles and other engines. Engine oil’s primary role is to prevent wear and tear. 15w40 synthetic diesel oil Rotella not only met CK-4 specifications in API industry wear testing, but it also exhibited an 85 percent increase in copper corrosion protection and a 98 percent improvement in lead corrosion protection, an average of 50 percent greater wear protection than necessary.

When nitrile sludge deposits are a regular occurrence in high load engines, complete synthetic Shell Rotella T6 15w40 Diesel Motor Oil is an excellent choice. Rotella 15W40 temperature range is minus 22 F to 122 F. It complies with the Euro 4 emission standards. In accordance with the US EPA criteria for low-temperature protection requirements, the oil stays synthetic at temperatures up to 150°F (65.6oC).

Full synthetic Shell Rotella T6 5W40 diesel engine oil has a 5-star rating for its quality. It’s made to operate well in humid and hot surroundings, and that’s precisely what it’s intended to do.

Premium base oils and synthetic technologies are used to produce this oil. It’s shown to be an excellent fit for diesel engines. In addition, it is very resistant to abrasions, corrosions, foaming, and deposits. All turbocharged diesel engines, even those with variable geometry turbos, may benefit from the anti-foam ingredients of Rotella T6 5w 40 synthetic.

The Rotella T6 5w40 specs show clearly that this oil is not suitable for racing types of vehicles, and the wrapping up of the engine can’t be done quickly. Other features include:

Superior lubricants in Shell Rotella 5W-40 set it apart from the competition and ensure that your car’s engine gets the possible performance out of it. Everything from Alfa Romeo to Seat to VW to many other recent city vehicles and SUVs and vans with engines under 2 liters should be used.

Shell Rotella synthetic 5w40 motor oil maintains appropriate shearing force inside the cylinder and maintains lubricant film thickness at its ideal level to protect your vehicle’s engine. As a result, oil changes may be delayed since the motor can run at a lower temperature without wearing down the engine components. This reduces wear-and-tear stress on cams as a consequence of increased fuel efficiency.

Manufacturers of all types of vehicles are making environmental preservation a priority since there are several ways to enhance the performance of their engines in the years ahead. Fuel consumption and smoke emissions are also reduced due to the progressive decrease in combustion temperature, resulting in no more hazardous pollutants being discharged into the atmosphere.

Fuel consumption may be reduced by using Shell Rotella T6 full synthetic 5W40 diesel engine oil, which decreases engine wear and prolongs the life of your vehicle’s engine. There is also an increase in fuel economy.

Synthetic base oils and innovative multi-functional dispersion additives protect heavy-duty diesel engines against the impacts of soot, grime, and other pollutants.

You can read about car alternator problems here: https://carrepairzone.com/why-new-alternator-not-charging-battery/

The cost of the Shell Rotella T6 5W40 vs 15W40 synthetic oils are prohibitive for many diesel engine owners who want the best for their vehicles. Using the oil may not have any noticeable effect on performance for certain people. You can trust Shell Rotella T6 to provide the best protection for your diesel engine while ensuring maximum performance. Your engine will last longer thanks to additives like shear stability, which are included.

The price of Rotella T6 5W40 is higher than 15W40. Amazon offers the Rotella T6 best price for both of its versions:

Understand the difference between Shell Rotella T6 5W40 vs 15W40:

The 5w40 is premium oil, which means it’s been developed specifically for high-performance engines. The viscosity of Rotella T6 5W40 vs 15W40 has major difference. Due to its greater viscosity, 5W40 surpasses 15W40. High viscosity oils flow readily when cold and protect against wear and corrosion when heated.

Industrial engine oil 15W40 is designed to withstand higher loads and higher temperatures than those often found in automobile engines. The viscosity grade 40 is the same for each of these oils. However, the 15W40 oil has a greater viscosity, whereas the 5W40 crude has a lower viscosity when the engine starts up.

Both 15W40 and 5w40 diesel engine oils are superior in terms of performance. Both of these fully synthetic oils offer their best results according to the vehicle’s needs. However, since the 5W40 has a lower viscosity than the 15W40 diesel engine oil, it facilitates cold start-up in very cold temperatures.

In the conclusion of Shell Rotella T6 5W40 vs 15W40, we suggest that both the products have top-notch quality, and you can decide one that is best for your car’s engine.

These products also provide benefits to essential parts like spark plugs and cylinders by decreasing the buildup of sludge and varnish, as well as a reduction in the amount of smoke and an improvement in horsepower.

Answer: T6 5W40 oil may be used in most circumstances instead of T6 15W40 engine oil because its start-up viscosity grade seldom affects an engine after it reaches operating temperature. However, the problem arises when the engine is too cold and too hot. In this scenario, 5W40 oil works better in cold circumstances, whereas 15W40 performs better in excessive heat. However, the demand for your car and the outside temperature is the primary determinants.

Answer: As long as you use Shell ROTELLA T6 Full Synthetic heavy-duty diesel engine oils regularly and correctly, your engine should last for up to 10 years with no significant issues (500,000 miles on a single cylinder).

Q#03: What’s the difference between Rotella T5 and T6?

Answer: Rotella T5 and T6 perform better in cold climates since their oil flow features enable you to safeguard your engine at a lower temperature. However, if you must drive it, its temperature decrease makes it the best option for keeping you cool. 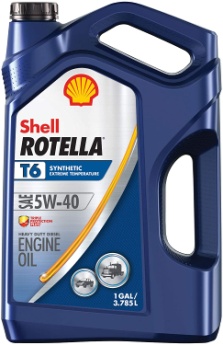 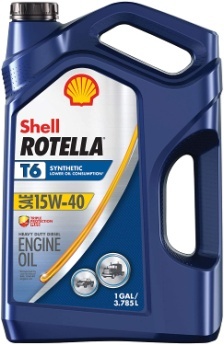 The Triple Protection Plus technology of Rotella T6 15W40 guards against wear, deposits, and oil breakdown while improving low-temperature flow. It also shows extended longevity in heavy-duty engines from pickup vehicles to tractors and semi-trucks.

Multi-functional dispersion chemicals defend against soot, grime, and other pollutants (compared to the previous formulation). It has improved shear stability for improved viscosity management and engine oil pressure.

Oil with Triple Protection Plus technology protects against wear, deposits, and oil breakdown while improving low-temperature flow. This product shows extended longevity in heavy-duty engines from pickup vehicles to tractors and semi-trucks. It also offers the same qualities as mentioned in the above two products.

You may have missed